"I am the Change" for Growing Agility and Agility Transformability

Fail well, avail of opportunities for learning. It’s a bit scary being so transparent, but hopefully rewarding in the long term.

Value Glide sees “growing agility” as a combination of art and science. Nader Talai is more of a scientist. John Coleman is more of an artisan. Science can be found in some of the component frameworks. Sometimes we just added principles from great experience reports like Extreme Ownership (Willink, 2015). The art is in how we assess integration of frameworks, how we integrate them for your context. We have plenty of case studies but we figure that an independent annual survey will tell its own story. Value Glide plans insofar as it can to run an independent annual survey with at least one (hopefully more than one) large agility organization and plans to conduct randomized controlled trials to attempt to falsify ideas in order to protect truth.

There are no sacred ideas, not even the words “I am the Change” from Value Glide. Why? To ensure growing agility artisans zone in on agility change like metaphorical guided missiles. We are inspired by the book “Black Box Thinking”, by Matthew Syed. It would be ironic if “Everyone else is the change” ends up being the truth as told by the data.

I am the Change in three words is “resonating with people”, not necessarily via empathy, perhaps instead with rational compassion (Bloom, 2017).

I am the Change Agility change chefs resonate with people in relation to growth of good sustainable agility, whether those people are leading a change, subject to a change, or involved somehow. It’s a tried & tested context dependent meta-framework that integrates latest thinking from the top thought leaders in agility and change. It’s implemented in the lightest possible way in each context, and adapts as the latest feedback arrives.

The three value propositions are: 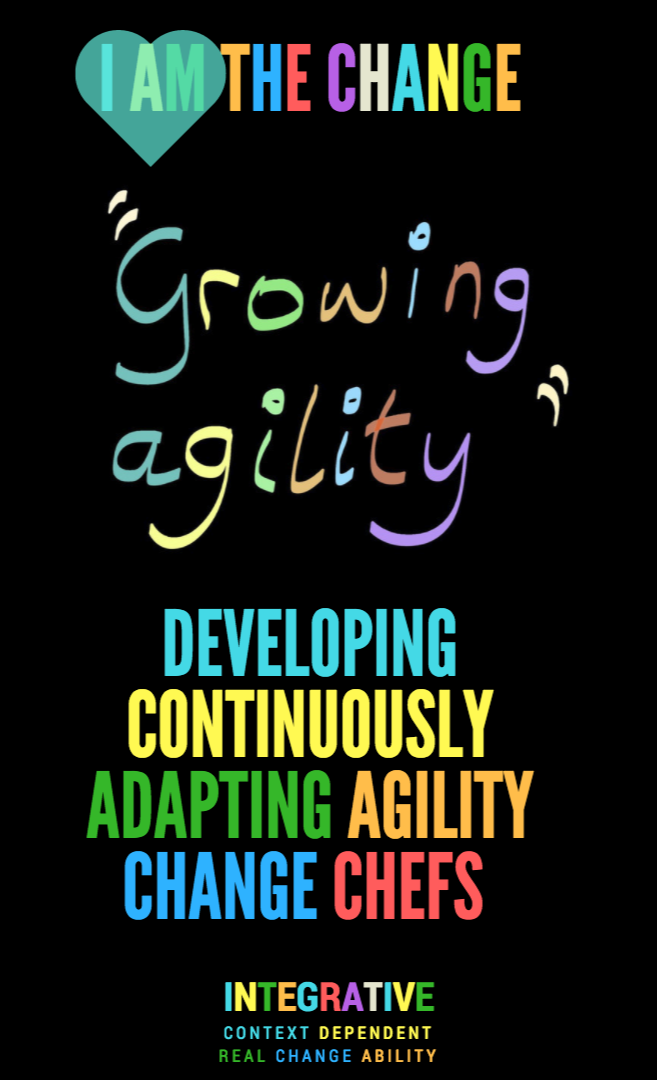 I am the Change is about developing agility change chefs who grow good agility in a fit for purpose manner. Extending the metaphor….. Commis chefs will be on top on their own metaphorical station whether that is Cynefin (Snowden and Boone, 2007), Systems Thinking or whatever. Sous chefs will have a breadth across the techniques, while head chefs and executive chefs will have more mastery.

Growing good agility usually requires organization wide process/organization-design/mind-set/behaviour changes. Scaling of agility should be avoided. Small teams of your best people reduce complexity. If you must scale, it’s important to use something that is fit for purpose for your context.

I am the Change for agility transformability is a sophisticated meta-framework integrating thinking from the world’s best thought leaders in change and agility in a minimalistic fashion. It is a framework of frameworks and pieces of frameworks that dovetail together. The component frameworks and sub-framework components knit together differently depending on the context. To that end, we call it an integrative approach as opposed to an integrated approach. Here we attempt to outline the typical pattern, while understanding that not all ingredients are needed in every context, and additional ingredients are need in special contexts, such as check-lists. I am the Change is a first; comparing it to component frameworks would be a thinking mistake. It is important to recognise that because this meta-framework looks very different in different contexts, even within the same organization in the same location. It does not have a lot in common with cookie-cutter approaches.

“I dream things that never were; and I say, ‘Why not?’ ” – George Bernard Shaw

I am the Change approach for agility transformability has been tried and tested in the most difficult environments (banking, insurance); in fact that is what it’s designed for, difficult environments. It is adapted regularly, sometimes adding ingredients, sometimes taking some away. You need skilled chefs to apply it properly. Here is a metaphor for the meta-framework. Everything on the side-doors & running board of the car is optional, but maybe needed for some contexts.

We have sample patterns but no recipes. Over-simplification can be dangerous.

“Everything should be made as simple as possible, but no simpler” – Albert Einstein

We’re aiming to significantly improve the odds of success for your transformation. We’re also trying to ensure this will be your organization’s last agility transformation as we make change and continuous improvement part of the normal daily work, Continuous Transformation.

It is our experience that misunderstanding the complexity of thinking at your organization can lead blocked communications channels and we look to psychological techniques and professional coaching to help us with that.

Viral networks/clubs & helping where there is strong “pull”

Always be on the look-out for fundamental problems and dealing with them in a pattern-seeking way. Even if the change sustains for 7 years, beware of system rebalancing. As philosophers say, “let’s see”. Change sucks but we’re here to help you.

Hopefully, you can see now why we need agility change chefs. More detail is to come...

Why do military techniques such as Extreme Ownership (Willink, 2015), Turn the Ship Around (Marquet, 2013), and Flawless Execution (Afterburner, 2017) feature strongly in is I am the Change?

It is to do with agility in regulated/controlled environments. The US Navy Seals, US Marines, and US Air Force managed to be agile in response to fluid organizations. We figure banks, insurance firms, oil companies and aviation need regulation and agility so we said to ourselves “why not borrow some tried & tested ideas?”. We’re just lucky that these ideas were published. If people from other countries had published similar work we’d be all over that too. It’s about ideas and how tested they are, not where the ideas come from.

How is I am the Change different from Lean Enterprise (Barry O’Reilly, 2017) and Lean Change Management (Leanchange.org, 2017)?

How is I am the Change different from AgendaShift (Agendashift.com, 2017) ?

Agendashift (Agendashift.com, 2017) is a potential component framework option for workshopping of recurring ideation & shaping of the change & possibly giving a rhythm to the change.

How is I am the Change different from behavioural change approaches such as Viral Change® (Herrero, 2008) ?

Viral Change® (Herrero, 2008) is a potential component framework option for figuring out the real change, generating pull, having backstage leadership, having formalised informal networks, and telling stories. People needing Viral Change® (Herrero, 2008) will need to use licensed providers or use alternative approaches recommended by I am the Change, such as its own principle sorting.

How is I am the Change different from Change Leadership (John Kotter, 1996)?

I am the Change recognises that all change must have support from the very top, but adds other component frameworks for keeping momentum and instead of aiming for quick wins, aims for quick story telling if Viral Change® (Herrero, 2008) is used for example. I am the Change combines push & pull with the larger emphasis on “pull”.

How is I am the Change different from change evolution approaches such as Kanban (Anderson, 2010) or Toyota Kata (Rother, 2009) ?

I am the Change had a similar pattern in 2012 to current day experiment oriented approaches. Other components have since been added to I am the Change other than SDi. We found that a key missing ingredient was using language that change participants can resonate with. SDi skilled partners tend to be able to ratchet their conversations up and down the spiral of thinking complexity, and thus have more effective conversations. I am the Change is focusing on the Dr. Don Beck version as opposed to Spiral Dynamics® (Spiraldynamics.org, 2017), mostly because we have a relationship with Dr. Don Beck, having been initially inspired by his audio book Spiral Dynamics Integral (Don, P. and Beck[audio], D., 2006).

Why does I am the Change not use Frederic Laloux’s Reinventing Organizations (Laloux, 2015) ?

I am the Change does refer to Reinventing Organizations (Laloux, 2015). Some presentations directly refer to it, as a means of explaining which component frameworks might help at different stages of organizational culture maturity. Indeed Gareth Morgan’s (Morgan, 2006) culture metaphors were always part of the I am the Change approach. SDi provides a toolkit for having meaningful conversations rather than us wondering how we can make our organization teal. Many people in agility are getting excited by Teal. We get more excited about relating to the people in front of us, so we emphasise psychological approaches like SDi and professional coaching. Culture change is fraught with difficulty. What we can do is hack/nudge the culture of the organization slowly. If the culture changes quickly, that’s a bonus; although we would be suspicious, and we’d be on the lookout for a system re-balancing act to counteract the change. The change is never over, it’s part of the work.

How does this compare / contrast to Michael Sahota’s work?

Michael Sahota also talks about “growing agility”. I am the Change is a foundation for the development of agility transformability chefs and has a lot of overlap (why are you doing this, method fit etc.) but I am the Change also a lot of additional content.

Does I am the Change dilute any on the component frameworks?

No. It may sometimes supplement them though. There are times though when we don’t fully yet endorse the framework but we liked one of the ideas in certain cases. We’re clear when we do it. It’s rare.

That remains to be seen. We have invited thought leaders from agility & change to collaborate. Some thought leaders have been very generous with their time. Some are very supportive. Even some thought leaders who didn’t support it helped a lot with their critique of our thinking. Some other thought leaders communicated that nothing other than their own individual approaches were needed, and we understand because we also love their approaches – we just think we can get them to work together. Let’s see what the science says.

I am the Change - the change starts with me, the last mile is with me. Let I am the Change promote your agility transformation pawn to a queen or to any piece on the chess board you need, and you’ll need no other. 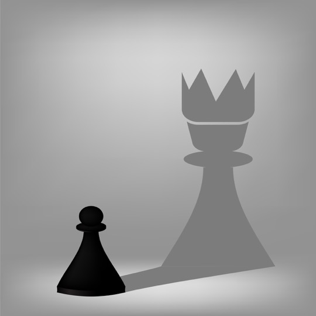 Clapham, J. (2014). David Viney, who did some of the original research on the effect of perceived change, to use his J-Curve in Steve Fullmer's courseware and related delivery.. [online] Available at: https://johnclapham.wordpress.com/tag/viney/ [Accessed 20 Oct. 2016].

Fussell, C. and McChrystal, S. (2015). Team of Teams: The Power of Small Groups in a Fragmented World. Portfolio Hardcover.

Juarrero, A. (2002). Dynamics in action: Intentional behavior as a complex system. Bradford Book.

Marquet, D. (2013). Turn the Ship Around!: A True Story of Turning Followers into Leaders. Portfolio.

The smell of the place Sumantra Ghoshal at world economic forum. (2013). YouTube.

Wilbur, K. and Wilber, K. (2000). A theory of everything: An integral vision for business, politics, science, and spirituality. Boston: Shambhala Publications.